The Fight Against Ignorance

I am a transgender woman and although I know that I am privileged in a great many ways; I still know what this feels like. Certainly not the same way I would have if I was sixteen years old, but the fear and anxiety are universal, the feeling of being the “other” is understood by all who embark on this journey.

The difference is that I transitioned in the adult world, on days when I felt particularly vulnerable I was able to withdraw from view until my confidence returned. I wasn’t

constantly surrounded by a mob of adolescents that acquire social standing at the expense of others or by an administrative bureaucracy pushing their religious convictions or without the fortitude to withstand the ignorance running rampant in the community at large.

It is with as the backdrop that I have watched as Gavin Grimm made the case for his humanity, to the school board, those in his community, and to the public at large. He is a thoughtful, well spoken advocate for all trans people in this country whose desire is simply be allowed to live their lives. His strength in the face of lies and ignorance shouted at him by adults with hatred filling their eyes is awe inspiring.

As the case has slowly wound it’s way through the judicial system, the transgender community has ridden the roller coaster of emotions, through district courts appellate courts and the court of public opinion. We have lent our support through commentary, blog posts and social media. We have marched, we have stood and spoken our truth, we have made the decision that we must be visible if anything is ever to change.

As Gavin’s case moved inexorably toward its ultimate hearing at the Supreme Court, the ACLU said they would file a friend of the court brief to this case and include the actual life stories of transgender people.Through a friend, I was blessed to have been given the opportunity to be one of those people. To think that my name, and something of my story would appear on an official document presented to the Supreme Court is incredibly humbling.

In the end, the current political climate and change in administration may delay this case, but it can not stop the inevitable march toward the recognition of transgender rights 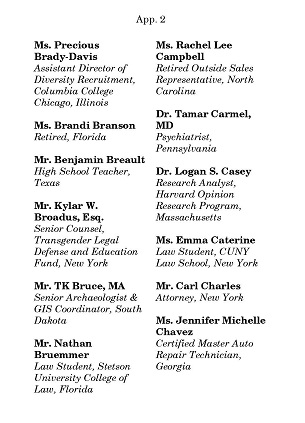 So it is with tremendous pride that I point to the second page of signatories, and there at the top of the right hand column is my name for all the world to see –  Rachel Lee Campbell

One thought on “The Fight Against Ignorance”